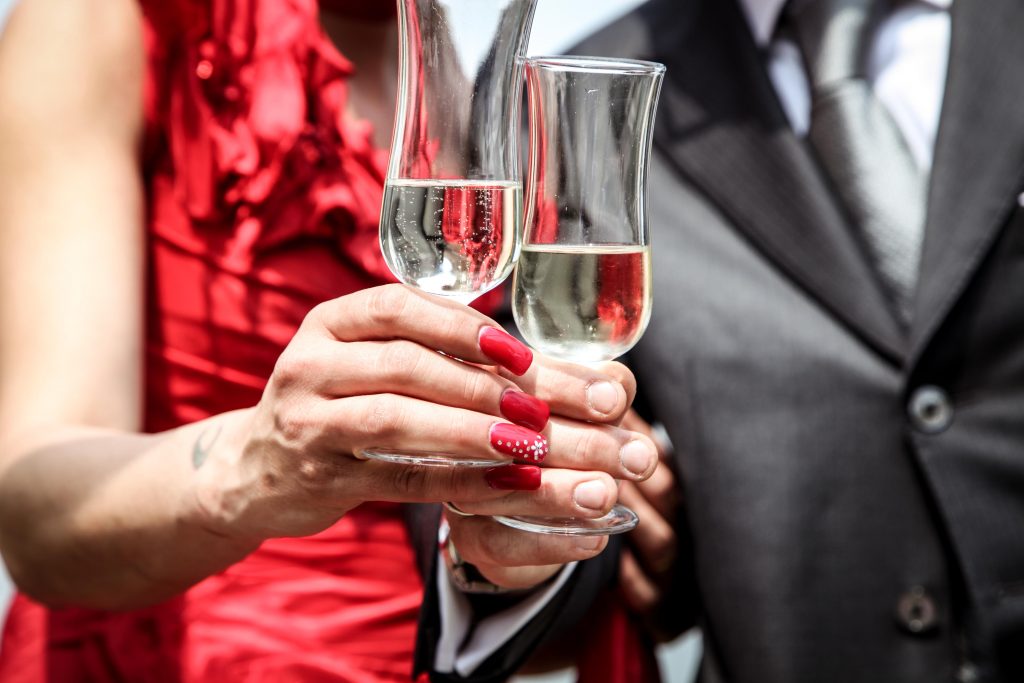 This blog is a conversation between COBE researcher Dr. Jessica Salvatore and COBE Administrative Director Tom Bannard. They discuss Dr. Salvatore’s recent article, “The Role of Romantic Relationship Status in Pathways of Risk for Emerging Adult Alcohol Use,” which we wrote about in our first Research Review.

Tom: So we are going to chat about alcohol, deviance, cheating and more alcohol?
Jessica: In a nutshell, yes.
Tom: With a little partying thrown in.
Jessica: For some, yes.
Tom: And we are focusing on your most recent article that is called?
Jessica: “The Role of Romantic Relationship Status in Pathways of Risk for Emerging Adult Alcohol Use” — that’s the formal title. But I have an informal title for it, too.
Tom: What is the informal title?
Jessica: “Alcohol-Related Risk Factors are Related to Riskier Patterns of Dating Involvement and Alcohol Use: Duh!”
Tom: So my first question is why do researchers write such boring titles for their work?
Jessica: That’s a great question. Not all scientists write boring titles. For example, social psychologists are very creative in their article titles. But that trend hasn’t caught on in all areas of research.
Tom: I think I would have named it “Parents, Booze and Playing the Field.”
Jessica: I like your title better.
Tom: Thanks! It’s a little harder to do a library search on though, so It makes sense to be very specific about what the article is about.
Jessica: Exactly.
Tom: Anyway, I really enjoyed reading your article, except of course for the middle part, which no one except you guys read.
Jessica: The methods and results? That’s the ONLY part of articles that I read!
Tom: In college, I definitely dropped off at Materials and Methods and pick back up at results. To be truthful, I read the whole thing now that I work with you guys. But I definitely still don’t totally understand the middle sections. Can you give a little background on the paper?
Jessica: Like I said earlier, I study relationships. We know from lots of studies of older adults that being married is associated with lower levels of alcohol use and problems. But, what about emerging adulthood? Is being in a committed romantic relationship–maybe not a marriage, but an exclusive dating relationship–associated with lower levels of alcohol use?
This is the highest-risk time for the onset of alcohol problems, and so emerging adulthood is an important time for exploring this question. It’s also the time in the lifespan where people start to have more serious romantic relationships. So, there’s a lot going on socially and behaviorally with respect to alcohol and other substance use in emerging adulthood. Now, in an earlier study in the Spit for Science sample, we found that being in an exclusive romantic relationship was not associated with lower alcohol use relative to being single.
Tom: So you want to find out if relationships protect people from heavy drinking?
Jessica: Yes, exactly.
Tom: And it does in older adults but it does not in the college kids at VCU?
Jessica: Yes. Older adults who are married drink less and have fewer alcohol problems compared to their unmarried or divorced peers. But that’s not the case with college students. There’s no “protective” effect of being in a relationship. But!
Tom: But…
Jessica: The important, novel thing that we noticed was that college students who say that they are dating several people drink more than their single or exclusively dating peers. This gets at the “playing the field” part of your suggested article title. So, that’s what we noticed in our earlier study. And I wanted to pursue this further, and find out whether this was just a “one off” risk factor, or whether it fit into a broader spectrum of risk factors for alcohol use.
Tom: So do they play the field because they drink or do they drink because they play the field?
Jessica: That’s a difficult question to answer. For ethical reasons we can’t manipulate students’ dating status. I think that both processes are at play, though. Experimental and quasi-experimental designs are the only way to get at causality, unfortunately.
Tom: Ok, so you guys really study the relationships between different factors, and I remember from 6th grade science “correlation does not imply causation.” 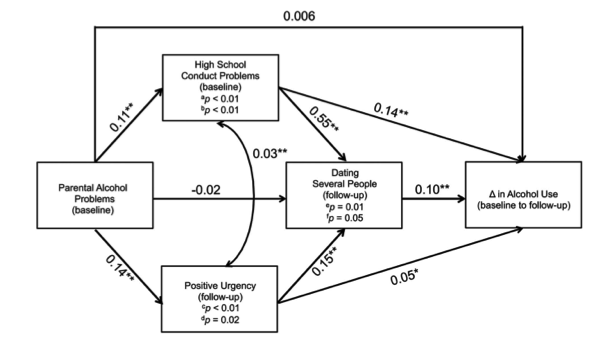 Tom: I really liked your chart in there. That was really helpful.
Jessica: I think that figures are the best way to summarize results. Should we talk about the figure?
Tom: Yea lets do. I made a simplified version for our readers. 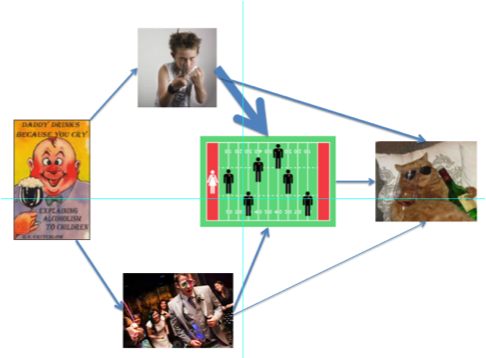 Jessica: Haha, I like the new model.
Tom: So essentially you guys found that a parent’s drinking does not have a direct effect on dating multiple people, but it does have an effect through other pathways.
Tom: Parental drinking is correlated with “bad behavior” which then is correlated with dating multiple people.
Jessica: Right. This is what we call an “indirect effects model.”
Tom: Parental drinking is also correlated with “party craziness” (you called it “positive urgency”, but Google doesn’t know what that is), which is then correlated with dating multiple people
Jessica: Positive urgency is doing “crazy” things when you’re feeling good. We all know people like this. They’re the ones that you see jumping off the 2nd story balcony into a pool at a house party.
Tom: Yea, my wife is glad I’m not that guy anymore.
Jessica: Positive urgency isn’t a uniformly bad thing. But it is associated with alcohol use, especially in college.
Tom: Ok, so the guy who goes streaking when he drinks is more likely to date multiple people.
makes sense
Jessica: Yes.
Tom: They might only be able to handle him/her one or two days a week. Lets talk about the other guy. You refer to his behavior as deviant in the article. That’s a little rough.
Jessica: Conduct problems are deviant, though. And as a scientist, you have to fit what you’re doing in the context of the literature. The deviance proneness pathway (behavior problems, causing trouble basically) is one of the most well-studied developmental pathways for alcohol use disorder. If I called it the “sometimes even good people do bad things” pathway, no one would know what I was talking about.
Tom: I get it, the behavior “deviates from the norm”; however, I wonder if that adds to the stigma associated with people with substance use disorders.
Jessica: How would you change it?
Tom: “A number that deviates from the norm is not an evil number,” but in a culture context some one who is devious or deviant is associated with evil or badness. And really you are talking about kids here. I think conduct problems is fair, behavioral problems is fair, and I understand that you have to be able to describe behavior
Jessica: That’s true. But skipping school, stealing, etc. is rule-breaking behavior.
Tom: I think rule breaking behavior is fair. But I think scientists have a responsibility to set the tone and understand the culture context
Jessica: Okay, that makes sense.
Tom: People with substance use problems are already incredibly stigmatized, I think its important for scientists to take a leadership role in changing the language. Ok… we’ve run down a tangent here. Back to the study. So, We’ll call him “Johnny Bad-Ass”, is getting in trouble at school and at home, which is connected with more drinking, but is also connected with more partners.
Jessica: Yes. Basically, the take-home point of the article is that “dating several partners” isn’t just a random thing that people do that’s related to how much they drink. Rather, it’s related to a number of background risk factors for alcohol use. So, basically, people with these predispositions toward conduct problems and doing rash things when feeling good (by virtue of having a parent with an alcohol problem) are also more likely to engage in dating patterns that put them at risk for higher alcohol use.