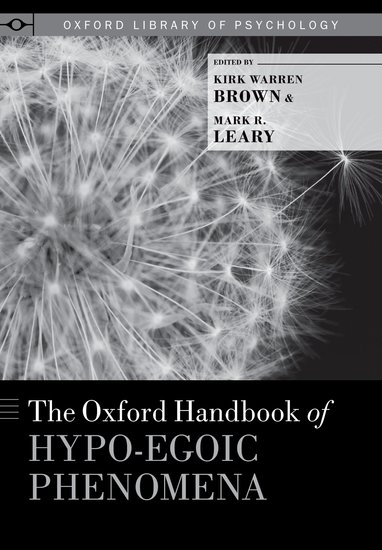 Dr. Kirk Warren Brown, a COBE researcher and associate professor of Social Psychology and Health Psychology in the Department of Psychology at VCU, along with co-editor Dr. Mark Leary, just published the first ever edited volume dedicated to hypo-egoic phenomena.

The book, entitled The Oxford Handbook of Hyper-Egoic Phenomena, offers cutting-edge investigations into a variety of hypo-egoic phenomena that collectively have widespread implications for personal, social, and societal welfare. It features multi-disciplinary scholarship and contemporary research and includes chapters authored by widely known, well-respected scholars in their fields.

Dr. Brown is also the senior editor (with J. David Creswell and Richard M. Ryan) of the recent Handbook of Mindfulness: Theory, Research, and Practice and is an elected Fellow of the Association for Psychological Science.

A brief description of the book is included below:

Egoicism, a mindset that places primary focus upon oneself, is rampant in contemporary Western cultures as commercial advertisements, popular books, song lyrics, and mobile apps consistently promote self-interest. Consequently, researchers have begun to address the psychological, interpersonal, and broader societal costs of excessive egoicism and to investigate alternatives to a “me and mine first” mindset.

For centuries, scholars, spiritual leaders, and social activists have advocated a “hypo-egoic” way of being that is characterized by less self-concern in favor of a more inclusive “we first” mode of functioning. In recent years, investigations of hypo-egoic functioning have been examined by psychologists, cognitive scientists, neuroscientists, and philosophers. Edited by Kirk Warren Brown and Mark R. Leary, The Oxford Handbook of Hypo-egoic Phenomena brings together an expert group of contributors to examine these groundbreaking lines of inquiry, distilling current knowledge about hypo-egoicism into an exceptional resource.

In this volume, readers will fi nd theoretical perspectives from philosophy and several major branches of psychology to inform our understanding of the nature of hypo-egoicism and its expressions in various domains of life. Further, readers will encounter psychological research discoveries about particular phenomena in which hypo-egoicism is a prominent feature, demonstrating its implications for well-being, regulation of emotion, adaptive decision-making, positive social relations, and other markers of human happiness, well-being, and health. This Handbook offers the most comprehensive and thoughtful analyses of hypo-egoicism to date.