According to a recent national survey conducted by the Substance Abuse and Mental Health Services Administration, 7.5 million (10.5%) children younger than the age of 18 in the United States live with a parent who had an alcohol use disorder in the past year. This is concerning, because research shows that kids who have parents with alcohol problems are also more likely to have alcohol and related problems.

Why do alcohol problems run in families? Research shows that alcohol use disorders are about 50% heritable. This means that about 50% of the reason for why people are different in their alcohol use behaviors lies in their genes. So it is not surprising that kids who inherit genetic risk toward alcohol problems from their parents are more likely to engage in risky drinking. However, the environments where the children grow up also play an important role. In a recent study, my collaborators and I explored whether and how parenting behaviors play a role in the transmission of alcohol problems from parents to children.

It turns out that parental alcohol problems increase adolescents’ risk for alcohol and conduct problems, in part, by disrupting positive parenting behaviors in the family. That is, parents who suffer alcohol dependence symptoms are less likely to be involved in their adolescents’ daily activities, less warm and loving, and have poorer communication with their adolescents. This, in term, may lead adolescents to engage in risky drinking and conduct problems. In other words, having an alcohol use disorder makes it harder for parents to be good, involved parents.

Alcohol problems consume parents’ psychosocial and financial resources, which can get in the way of parents’ ability to create good home environments and to provide positive parenting behaviors to their offspring.

Perhaps fathers’ alcohol problems create high levels of strain and emotional tension in the family. It is also likely that when the father has alcohol problems, the mother may need to compensate by increasing her responsibilities and duties (e.g., taking over some activities from the father), which may add additional stress and time involvement that could potentially undermine mothers’ positive parenting. In contrast, given that most mothers have primary caregiving roles in the family, mothers may be more likely to maintain positive parenting behaviors such as involvement and communication with their adolescents, even when the mother suffers from alcohol problems herself.

Disrupted parenting behaviors are just one way by which parental alcohol problems may increase their adolescents’ risk for alcohol and conduct problems. We continue to explore other pathways of risk, with the hope to inform prevention and intervention efforts that break the intergenerational transmission of alcohol problems. 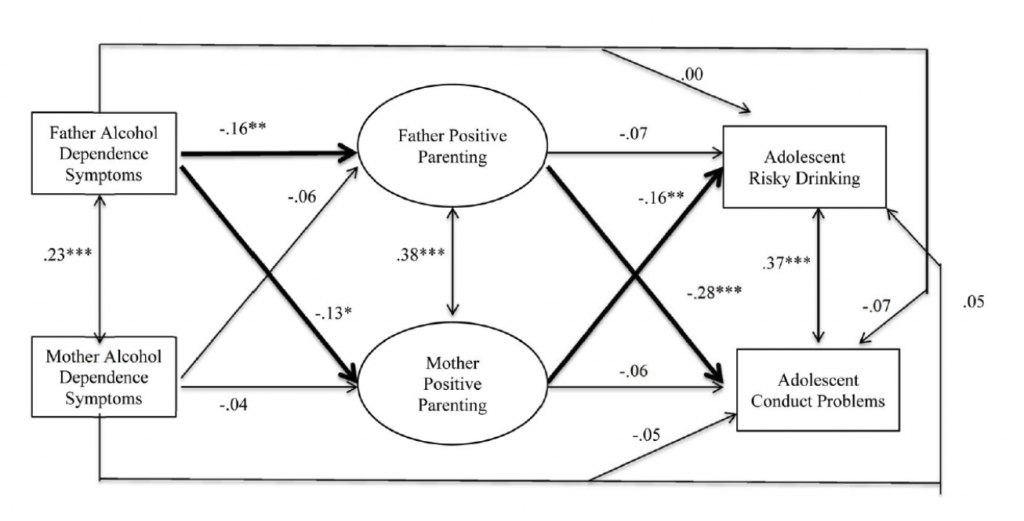 Dr. Su is a COBE postdoctoral fellow whose research focuses on the mechanisms (e.g., parenting, intermediate phenotypes) through which genetic predispositions influence substance use and related outcomes, and how genetic predispositions interact with culturally-relevant risk and protective to influence substance use and related outcomes among racial/ethnic minority populations.