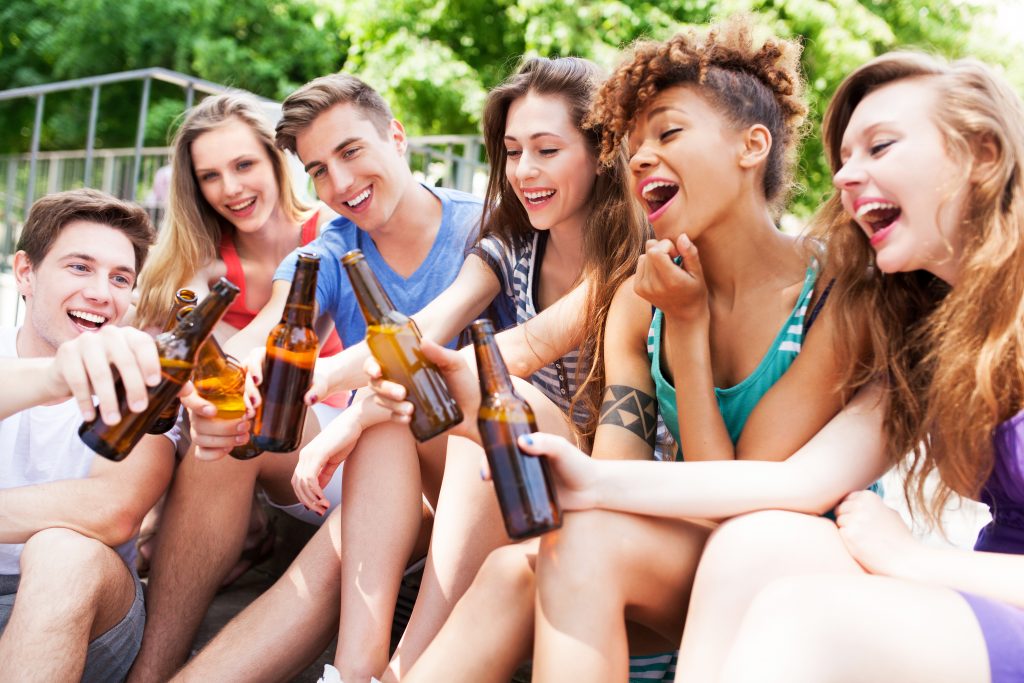 Is there a link between frequent hook ups and risky drinking?

Yes — some of the same background factors that lead people to casually date also inform their risk for problem alcohol use.

In a paper entitled “The Role of Romantic Relationship Status in Pathways of Risk for Emerging Adult Alcohol Use” published in Psychology of Addictive Behaviors in 2016, COBE researchers led by Assistant Professor of Psychology Jessica Salvatore explored the ways that parental drinking, hooking up and risky drinking are all connected.

“Dating several partners isn’t just a random thing that people do that’s related to how much they drink,” Salvatore said. “Dating several partners is part of a pathway of alcohol risk factors that starts with having a parent with an alcohol problem, exhibiting conduct problems in adolescence, and having a personality type that lends toward doing rash things when feeling good. Having these risk factors makes one more likely to engage in casual dating patterns, which in turn is associated with higher alcohol use.”

Prior studies have shown that relationship status as a young adult impacts different health outcomes including alcohol use and misuse. For example, an earlier study by COBE researchers found that VCU first-year students who said they were dating multiple partners drank more on average than their peers who were single or in committed relationships.

But this study did not focus on the specific pathway that these variables operate through. How do people wind up dating several partners? Are the risk factors that lead someone to date multiple partners also putting people at risk for alcohol misuse?

Salvatore and her team produced three hypotheses about what risk factors might contribute to the link between dating multiple partners and alcohol use.

To learn more about the exact relationship between these experiences, researchers used the data set generated by Spit for Science, a university-wide research project at VCU featuring data from thousands of students over the course of their college careers.

From their early months as freshmen through their senior year and beyond, students fill out surveys that allow researchers to explore many different aspects of the undergraduate experience at VCU.

For this study, participants were asked about their parental history of alcohol problems, high school conduct problems, relationship status, positive urgency (doing impulsive things while feeling good–like excitedly jumping off a balcony at a party) and alcohol use at the beginning and end of their freshmen year.

Researchers found that a parent’s drinking does not have a direct effect on dating multiple people, but it does have an indirect effect through other pathways, as shown in the model below. 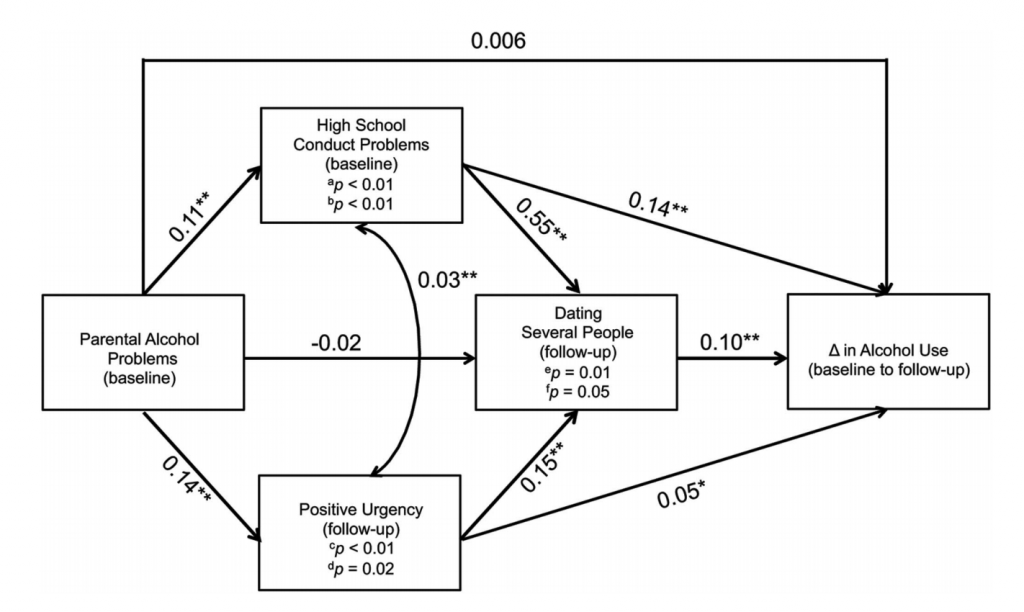 The top pathway shows that parental alcohol problems are linked to high school conduct problems, which are in turn associated with dating several people and increases in alcohol use. This suggests that dating several people is part of a broader deviance proneness pathway, which is one of the most well-studied and robust pathways for alcohol misuse.

The central premise of the deviance proneness model is that alcohol misuse reflects a long-standing susceptibility to disinhibited behavior that begins to manifest as deviant behavior in childhood and adolescence. This proneness to deviance expresses itself both in the predilection toward casual dating and risky alcohol use.

The bottom pathway again starts with parental alcohol problems but the intermediate variable is positive urgency, or a tendency on the part of an individual to behave rashly in response to positive emotions in order to prolong or intensify them.

This is called the positive affect regulation pathway, which is driven by emotionality characteristics that are associated with the use of alcohol for its positive reinforcing effects (i.e. feeling good) and is closely tied to perceiving alcohol use as rewarding. This predisposition to impulsivity while in a good mood expresses itself both in the tendency toward casual dating and risky alcohol use.

Contrary to researchers’ expectations, a parental history of alcohol did not have a direct association with dating several people. However, as their second and third hypotheses predicted, there was an indirect effect of parental alcohol problems on dating multiple people via both the deviance proneness pathway and the positive affect regulation pathway.

Limitations of this study included the fact that the sample survey was limited to college students and may not generalize directly to non-college emerging adults, reliance on self-reporting and retrospective measures, evidence that those with high levels of alcohol use and conduct problems were less likely to complete follow-up surveys and the lack of direct evidence that dating several people directly causes an increase in alcohol use.

These pathways show that relationship experiences are part of pathways of familial and individual-level risk factors for alcohol use that begin early in life and extend through adolescence and emerging adulthood.

For Students – If you have a tendency toward positive urgency or deviant behavior, be aware that these habits can express themselves in many different facets of your life including relationships and alcohol use. There is no value judgment placed on having these traits. They can be positive or negative depending on how you leverage them. It is just important to know yourself and be honest about who you are so that you can continue to find ways to thrive.

For Parents – It is always important to talk with your children about substance use and relationships. If you have experienced alcohol use problems in the past or see traits of impulsivity and/or deviance in your children, it is even more important to do so in order to help them successfully navigate their college experiences.

For Practitioners/Professionals – The strongest path shown in this study was the connection between conduct problems in adolescents and dating multiple people in college.  Professionals working with young adults that have a history of conduct problems should also be aware of increased likelihood of relationship challenges for their clients in addition to substance use related problems.

For Researchers – Relationship experiences are part of a network of familial and individual-level risk factors for alcohol use that begin early in life and extend through adolescence and emerging adulthood. In emerging adulthood, it may be particularly important to consider “non-traditional” relationship statuses such as dating several partners to understand the associations between relationship experiences and alcohol use. This is especially relevant given the rise of dating apps such as Tinder, which makes it easier than ever to connect with potential partners.